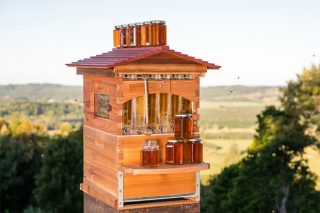 Ever since we’ve learned how to safely harvest the ultimate health supplement and realized just how important bees are for the ecosystem, beekeeping has become a respected and prominent business all around the world. Still, no matter how far we came with technological progress, one thing remained the same: beekeeping was extremely tedious and demanding. Only those well-versed into a honey making and thoroughly educated about bees were able to succeed in this line of work, as it was mostly unavailable to the common individual.
In February of 2015, this changed forever, with Honey Flow Hive.

How is making flow hive started?

A small family-based team of beekeepers spent years wondering how they could make beekeeping more accessible and less backbreaking. After numerous failed tests, they finally came to produce something truly extraordinary. It all started with an idea: what if you could pour honey into a jar like water into a glass? This unimaginable thought seemed so distant at the time, but years of hard work and elaborate thinking brought it closer – to the entire world. They finally managed to devise a contraption that would allow for exactly this, and the first time it worked, it was like something straight out of a fantasy movie. Soon, they started filling jars upon jars of prime quality honey, and not long after, they posted their invention on Indiegogo.
To this day, the Flow Hive maintains the record of the highest amount of cash ever raised for a crowdfunded project in the shortest amount of time – $2 million in 24 hours.

Now you’re probably wondering, how could this actually be achieved?

Well, when it comes to honey harvesting that we’re all used to, there are hours of effort that need to be invested into smoking the bees and scraping the honey off the combs one by one. This process doesn’t only take a long time, it can cause stray bees to drown in honey or get mangled by the scraper. The one issue of all beekeepers now has a practical solution.

Namely, the Flow Hive works on the principle of plastic combs susceptible to motion. They are made up of plastic rows containing halves of the hexagonal shapes, which allow for the honey to be stored when aligned properly. When moved out of alignment, they cause the honey within to spill and flow down into the taps. This motion is triggered by turning a steel bar in the top right corner, which shortens the entire harvesting process to a few seconds and allows you to complete it without any safety measures, as the bees are undisturbed by this change. The space in between the wooden sides and the comb compartment is narrow enough for bees to be unable to pass through it, and yet wide enough to allow air flow. The front and the sides of the Flow Hive can be opened to reveal the see-through walls of the actual compartment, allowing you to witness the actual creation of honey.

Those who have tried the invention for themselves claim that tap honey has much more consistency and overall quality, unparalleled by anything else you’ve tried so far. Various beekeepers now use the Flow Hive, and you can cut a good deal with a little browsing.
Lastly, if you’re that much of a bee aficionado, get the actual hive yourself.
Pour away, and Bon appetite!