How to Gain Weight? 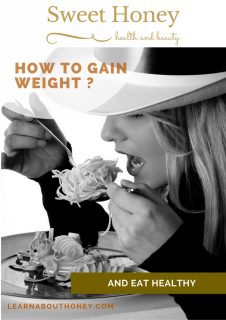 Although many would agree that the global population as a whole has somewhat more of an obesity problem than that of being underweight, being far too skinny is still a major issue for anyone that experiences it and it requires the equal amount of attention, if not even greater.

The reason for this is the fact that being obese poses an early death threat while being underweight means 14% early death for men and about 10% for women.

One would argue that this issue can be disregarded in the face of the opulence of unhealthy and rapid weight gain products that flood the market.

However, those who are underweight are either genetically restricted to being that way or their bodies simply fail to properly ingest the carbs. Even if that’s not the case, unhealthy eating for weight gain is equally as unhealthy as being underweight.

The only healthy solution to this problem is eating healthy carb-rich foods that both empower the body with benign chemicals and provide it with excess fat.

The best foods for natural weight gain are those beneficial to one’s health that nutritionists tell obese individuals to stay away from. Being underweight equals a perfect scenario for enjoying increased amounts of health benefits that these foods offer completely risk-free, which makes the condition a lot more manageable for anyone that thinks about this.

Bread is something we consume during almost any meal, and when the consumer needs to gain weight, they can enjoy the starchiest bread possible as much as they like, while contributing to their health at the same time. This, of course, doesn’t mean you should overeat, as that can lead to intestine and stomach issues. However, it does certainly imply you can have two or three extra morning sandwiches with no repercussions.

We all know sugar makes one fatter, but why satisfy for the processed table powder that contains carbs only, if you can opt for something, even more, fat inducing and yet extremely beneficial? The advice is as simple as it gets: use honey instead of sugar, wherever applicable. While honey certainly doesn’t mix with coffee, it can pretty much go with anything else and make it sweeter. Aside from regularly drinking anything you’ve put honey into, you can spread it over your whole-wheat bread in the morning and even just swallow a few tablespoons. Honey is a health supplement that consumers are warned about ingesting too much of, in order to avoid weight gain. In the case of being underweight, the only downside of honey becomes the main benefit.

These tiny snacks are famous for their numerous beneficiary properties, but the potential consumers are advised not to eat too much of them on a regular basis in order to avoid maintaining or gaining weight. For anyone with ultra-rapid metabolism, this is the number one solution. The unusually high fiber count contained in this high satiety food means that the body takes significantly more time to digest it.

The three foods you’ve just read about may be the top for gain weight, but there are many types of fruits, snacks and the like that you can use to achieve the desired weight. Combining them into a steady weekly meal plan is the ultimate weight gain strategy.