Why Are the Bees Disappearing?

For quite some time now, there’s been a large decrease in global bee population, putting numerous beekeepers out of business and leaving honey lovers in fear.
So what’s really at play here?
Are the toxic gasses emanating from our factories and cars finally getting to even the healthiest of places and ruthlessly slaughtering our honey makers?
Possibly, but that accounts only for about 15% of the global bee death toll. The real reason for honey bees disappearing at such an alarming rate is something we’ve named CCD in the recent years or Colony Collapse Disorder for those that aren’t familiar with the term.

The vanishing of the bees

A new study from Harvard helped us determine the main CCD culprit: neonicotinoids. They are the world’s most widespread insecticides, which can be found in the soil of any modern farm field. The way this causes the vanishing of the bees is by infecting the local flora, from which bees gather pollen to take to their hives. Even though the industry is assuring the public that the pesticide is biodegradable, the statistics speak for themselves. The more farmers decide on putting neonicotinoid-based pest deterrents on their crops, the more the global risk of bee extinction increases.

Maryam Henein produces documentary film “Vanishing of the Bees” in 2010.

Vanishing of the Bees – Trailer from Bee The Change on Vimeo.

The dilemma of whether we can save the bees at all is a rising topic amongst nature enthusiasts and zoologists worldwide. The fact is that the laws of bee preservation are layers under those allowing the widespread use of lethal pesticides. It seems like nothing in nature is of value, if what’s killing it is bringing billions in profit. This kind of business logic is certain to bring peril to many species, including honeybees. No other type of insecticide has ever wreaked as much havoc on bees as neonicotinoids do, and it’s starting to bind the hands of those focused on bee preservation.

What’s perhaps, even more, hatred-inducing are the overall statistics related to neonicotinoids. Research shows that over 100 crops in the US only are dependent on the pollination of bees, and yet all of those crops are constantly sprayed with insecticides. Not only do they wipe out the local benign insects, they also afflict the consumers with numerous health issues. To top off the irony, most of these conditions are treatable or at least partially remediable with a regular intake of honey.
How long does this mass murder spree of all lifeforms need to continue before the industry string holders realize what they’re doing to our planet? 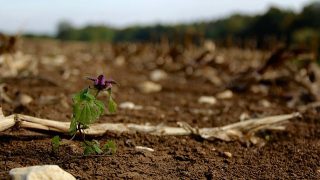 Preparation for the Inevitable

If bees disappear from the face of the earth, at least a third of our food will vanish along with them. Some non-bee-pollinated crops like wheat and corn would survive, but the fruit, vegetables, and flowers, those would all be gone.

With the above-mentioned in mind, there will be no halting the looming death of some of the most important animal species on Earth. Consequently, various prominent beekeepers are starting to form small eco-alliances, raising public awareness of bee slaughter and crowdfunding botanical gardens away from the influence of pesticides. If the grim future is to eventually come true, we will be looking at a worldwide bee colony count of a two-digit number and an immense rise in honey costs.

You can help the global cause by spreading the word about honey bees disappearing and signing various petitions, but that’s as far as the extent of consumer’s influence goes.